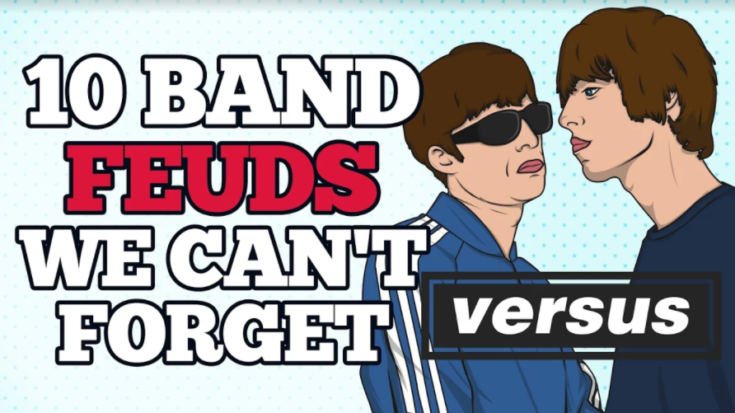 These rockers had beefs before they were cool. And because there was no Twitter back then, they either took to TV shows to trash talk or well, did it the old-fashioned way – by saying it face to face. They have big egos, that’s a given, so at some point they were bound to clash with each other. That’s totally understandable when you’re in the same band and have to deal with each other every single day. But sometimes, the feud is between frontmen of other groups.

What can we say? Some of these rockstars act like divas too and not everyone will put up with that. There are those who patched things up easily while others aren’t so forgiving – they’re still not on speaking terms today. And thanks to Twitter, they can easily start trading insults.

So, here are some of the nastiest and most controversial feuds in rock history. Grab your popcorn now.

What do you mean keep it in the family? These two’s bad blood has been all over the pages for years. From Liam refusing to play alongside Noel during the taping of their MTV Unplugged episode to engaging in a backstage fistfight during a music festival, there’s no shortage of drama here.

How did it start? Some say it all began when they were kids and had to share a bedroom. Others believe it was during a concert in 1994 when Liam hit Noel with a tambourine. We don’t know for sure but for more than a decade, they’ve been slinging insults at each other. Here’s the most recent one:

“So I hope he’s having the shittiest time of his fu**ing life.” – Noel Gallagher in an interview with Paste Magazine

Liam called Noel a “potato” and “a fu**in’ priest” while in turn, Noel referred to Liam as a dick. Well, so much for brotherly love.

Based on what we learned from both Oasis and The Kinks, being affiliated by blood doesn’t necessarily guarantee going along great. Well, duh? The Kinks’ Ray and Dave Davies have probably been feuding since they were kids. They obviously have several unresolved issues which exploded when they achieved worldwide fame.

During Dave’s 50th birthday, Ray acted ever so mature by ruining the cake. Whenever they’re within three feet of each other, there seems to be some mounting tension.

“The thing is, there’s healthy relationships, and toxic ones. And the older I get, the more difficult I find it being around Ray, because – I don’t want to use the word abuse – but I feel my energy seeping away from me sometimes if I’m with him.” – Dave Davies

Dave even goes so far as comparing them to Cain and Abel. Here’s to all of us hoping they will eventually come around.

When you’re as creative as Roger Waters and Pink Floyd, you’re bound to clash. Especially with their big egos, you know none of them will back down. In the late ‘80s, Roger distanced himself from Pink Floyd, recorded his first solo album and embarked on a solo tour.

But it didn’t end there. Because of contract obligations, there were so many legal battles involved but one notable case included Roger going to the court to prevent the band from using the name Pink Floyd.

“If one of us was going to be called Pink Floyd, it’s me. That’s my pig [on their stage]. That’s my plane crashing.” – Roger Waters

Although it wasn’t as messy as the Oasis’ feud, Roger still managed to hurtle insults at his former band mate by claiming that David Gilmour’s lyrics were “very third rate” and called the songs “poor in general.” In 2005, they performed together after more than two decades. Five years later, David and Roger went onstage again for a charity event.

Steven Tyler and Joe Perry had numerous disagreements over the years. They have a love/hate relationship – like the time Joe quit Aerosmith and him walking off the stage after Steven accidentally hit Joe’s head with a mic mid-performance. And more recently, Joe wasn’t too thrilled when Steven crossed over to country music.

Steven responded by saying, “Jealousy runs deep in this family.” The squabbling and word wars aren’t new but at the end of the day, their bond remains tight and strong as evidenced by Steven’s concern when Joe collapsed on stage while performing with The Hollywood Vampires.

“I can only tell you that Joe’s my brother and I love him so much.” – Steven Tyler

Awww, isn’t that the sweetest? Even though Joe didn’t say it, we know he feels the same way for Steven. After all, they’ve been through so much together and little conflicts don’t make huge dents in their relationship.

You know what, 9/10 of these feuds happen because of bruised egos. And when you’re in a powerhouse trio like Cream, you’re bound to be at each other’s throats maybe most of the time. Even though Cream’s golden era was only short-lived, the impact they made in rock ‘n roll is just incalculable.

And each member was the crème de la crème of their respective instruments. But perhaps it’s partly because of the tension between them which made them step up their game once they get down to business. Rumor has it, one time, Ginger Baker and Jack Bruce were trying so hard to upstage each other they didn’t notice Eric Clapton already stopped playing.

“I used to be mean – I’d deliberately mess up recording sessions with my temper and go mad at the slightest thing… I’m not an easy person to get on with, I know.” – Ginger Baker

They were vocal about their feelings. Jack once responded to reunion comments by saying, “We had plans, until Ginger turned into a c**t.” In another interview, Ginger claimed that Jack was like “Jekyll and Hyde.” They’d disagree with almost anything and would even yell at each other on stage. Thus, Eric became the mediator which eventually wore him out.

Perhaps Glenn Frey was right when he said that it was “Hotel California” that destroyed The Eagles. This is what started it all – Don Felder wanted to provide vocals for his own composition but it wasn’t impressive enough for the group and Don Henley even added that it didn’t come up to their standards.

So how did they handle it? While Felder was out, they removed his vocals and well, re-recorded the whole song.

“Don Felder, for all of his talents as a guitar player, was not a singer.” – Glenn Frey

There was also the incident when Felder and Glenn almost got into a fistfight while performing. You can only imagine the tension. The breaking point was when Felder accused both Glenn and Henley that they were getting more than him financially.

And so in 2001, The Eagles booted Felder out of the band. The conflict didn’t end there because Felder filed several lawsuits. After Glenn’s death, Felder issued a statement which began, “Glenn’s passing was so unexpected and has left me with a very heavy heart filled with sorrow.”

Since we’re on the subject of big egos (and fabulous hair), here’s the perfect example: Diamond Dave and Eddie Van Halen. In a nutshell, Eddie wanted to discuss their next album while Dave wanted Eddie to score Crazy from the Heat – a movie which starred Dave. Eddie declined the offer.

So basically, we have two guys with different priorities. They just didn’t see eye to eye.

“The band as you know it is over. Dave left to be a movie star. He even had the balls to ask if I’d write the score for him.” – Eddie Van Halen

The film remained nothing but a plan, however. In an appearance at the MTV Video Music Awards, the audience had a full view of the tension between Dave and Eddie. Before the night was over, Eddie denied any possibility of a reunion because of his scheduled hip surgery. Dave responded by saying, “Tonight’s about me, man, and not your fucking hip.” The press would’ve been treated to a full-blown fist fight had it not been for the intervention of a tour manager.

They tried to tour together again a few years later but, it just didn’t work.

Axl Rose isn’t easy to get along with. He’s hot-tempered and highly unpredictable – he could lash at you for no particular reason. He shows up when he wants to show up, he’ll walk out when he feels like it. To be fair, he’s consistent because he’s a diva even to his band mates and other rock icons like Nirvana’s Kurt Cobain.

Like every other group, Axl and Slash had disagreements but the turning point of their relationship was when Slash collaborated with Michael Jackson for his song “Black or White.” Slash eventually left GnR and the two of them weren’t on speaking terms for decades.

“Personally I consider Slash a cancer and better removed, avoided – and the less anyone heard of him or his supporters, the better.” – Axl Rose

As you know, that one has a happy ending when they reunited and started touring again.

The other beef Axl Rose had was with Kurt Cobain and Courtney Love. Before the much-publicized beef at the MTV VMAs, the conflict between the two frontmen started when Kurt rejection Axl’s invitation to join GnR on tour and also for Nirvana to play at Axl’s birthday party. Not used to being snubbed, Axl referred to Kurt and Courtney as “a junkie with a junkie wife.”

Even if you’re not a huge fan of The Beatles, chances are, you know about the rift between John Lennon and Paul McCartney. They weren’t just bandmates, they were also buddies and they worked closely together in writing some of The Fab Four’s greatest hits.

With the mounting tension and dissatisfaction, Paul McCartney announced his departure from the band on April 1970 but he did so one week before his first solo album was to be released. Later that year, Paul filed a case to dissolve the band’s contractual partnership.

“I pretty damn well know we got fed up of being sidemen for Paul.” – John Lennon

Then when they embarked on their solo careers, they responded to each other with diss tracks. But that wasn’t enough, apparently. In 2016, a letter from John to Paul was auctioned off for $20,000 and John’s anger was almost palpable especially when he wrote: “I hope you realise what s*** you and the rest of my “kind and unselfish” friends laid on Yoko and me, since we’ve been together.”

Ladies and gentlemen, this is Simon and Garfunkel serving up some real juicy beef goodness. Their final album together, “Bridge over Troubled Water,” was a smashing success. But even with numerous chart-topping hits, their relationship was starting to deteriorate and they merely had to tolerate each other.

One of the significant moments which strained their relationship further was when they were contacted to star in a movie adaptation of Catch-22. However, Paul Simon’s role was cut and with Art Garfunkel spending months filming, his frustrations kept piling up.

After their breakup, they reunited a few times but there was still bad blood between them.

“We are indescribable. You’ll never capture it. It’s an ingrown, deep friendship. Yes, there is deep love in there. But there’s also shit.” – Art Garfunkel

Is it all good now? Maybe not, because in an interview back in 2015, Art spoke about Paul and said, “I created a monster.”