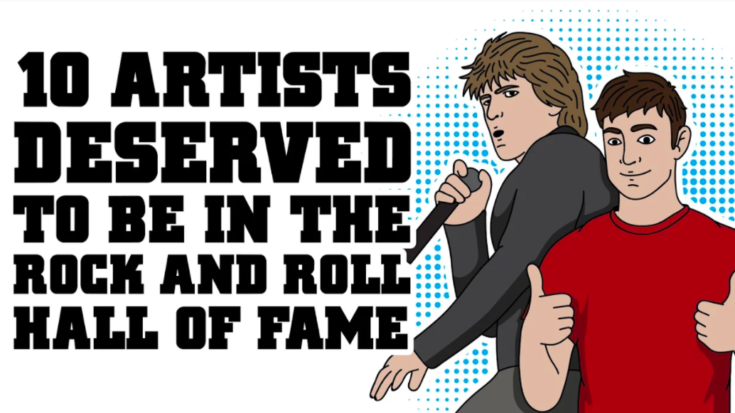 The Rock and Roll Hall of Fame announced the 19 nominees for its 2018 roster early this October. Now, when an artist or band bring great music, put on amazing sold out shows, and has been serving us incredible entertainment for decades, we always want them to be recognized in the best way. Getting inducted in the Rock and Roll Hall of Fame has always been riddled with debate or controversy on whether whichever rock star deserves a coveted spot in the prestigious Hall. Some fans may argue that their favorite artist deserves to be in the Hall of Fame more than anyone already inducted, but there are those who really deserve to be there. The foundation’s own website states that the prestigious recognition “honors the legendary performers, producers, songwriters, disc jockeys and others who have made rock and roll the force that it is in our culture”.  Well this list includes legendary performers who truly deserve to be inducted in the Hall of Fame.

It’s a shame that Linda Ronstadt is only getting recognized for her extensive music career now when she became eligible to be nominated in the Rock and Roll Hall of Fame almost 20 years ago. Her 40 year-long career has already brought her many accolades including 12 Grammy awards and a staggering over 100 million record sales. She might not have been the most popular singer in the 1970s, but she’s built a solid reputation throughout the decades with her impressive and distinctive soprano and her ability to venture into diverse musical genres. She has successfully sung folk and folk rock, hard rock, pop rock, country rock, jazz, American songbook standards, even Mexican ranchera! It took a while, but she was finally inducted into the Rock and Roll Hall of Fame along with KISS, Peter Gabriel, and E Street Band, to name a few, in April 2014.

Steppenwolf basically came up with the term “heavy metal” and that alone should already be enough for them to get into the Rock and Roll Hall of Fame. Although during the time when the band released the song “Born to be Wild” in which the lyric “heavy metal thunder” is from, it didn’t really refer to music rather it was about motorcycles. Steppenwolf really are the pioneers of hard rock, doing heavy take on blues and soul rock music. The band was very influential in the rock genre of the ‘60s. Their songs, especially “Born to be Wild” and “Rock Me”, became classic anthems, selling millions of copies worldwide. Steppenwolf was such a huge influence to many generations after them in the genre, and basically creating an entirely new branch of rock music, it’s surprising how it was only in 2017 that they were inducted as Rock and Roll Hall of Famers.

Chicago is one of the most successful rock bands in America boasting a career of almost 50 years, 36 albums, and selling over 100 million records world wide. Their album Chicago 17 even went platinum six times! They truly are one of the best-selling rock groups in the world of all time! The band has even made history in 1971 when they became the first rock act to ever sell out Carnegie Hall.  They were inducted into the Rock and Roll Hall of Fame this year but their induction was somewhat controversial when  the band’s vocalist and original co-founder Peter Cetera decided to skip the induction. It was said that his absence was due to a disagreement with the band over their performance in the event. Despite his absence in the actual event though, it is undeniable how deserving the band is of this honor, as in terms of sales and longevity, they are one of the most successful bands out there. Their place in the Rock and Roll Hall of Fame is certainly long overdue!

Throughout the past 40 years, KISS has become icons in the world of rock and roll, what with the countless merch with their logo and name on it (Gene Simmons knows his marketing business). Aside from every product you can think of that has their stamp on it, KISS of course also pioneered theatrical glam rock. They normalized exuberant acts on stage with larger-than-life stunts and space-age costumes, and of course, the make up! Almost fifteen years after the band became eligible for induction, they were finally inducted into the Rock and Roll Hall of Fame in 2014. Tom Morello from Rage Against the Machine was the one to have the honor of inducting KISS into the Rock Hall, and not without a controversial line or two in his presentation. Morello said to the audience,

“You can kiss my KISS loving ass because KISS wasn’t a critics’ band. It’s the people’s band…. Impact, influence and awesomeness — KISS have all three in spades,”

Unfortunately, KISS did NOT perform during their induction night, with guitarist Paul Stanley explaining in his speech, “The people pay for tickets. The people buy albums. The people who nominate, do not”, taking a jab at the Rock Hall’s exclusion of them for many, many years.

A big part of the first wave of the British Invasion in the ‘60s along with The Beatles, The Zombies have been eligible to depart of the Rock and Roll Hall of Fame since 1989. They’ve been nominated three times, most recently for the upcoming 2018 induction. They have a sturdy catalog of hit singles, though not as many as their British Invasion contemporaries. Their second and final landmark album Odessey and Oracle has even earned the number 100 spot on Rolling Stone’s list of the “500 Greatest Albums Of All Time”.  It’s indisputable that The Zombies are now known as one of the most respectable bands of the British Invasion era, and their nomination is much deserved but not as much as they deserve to be finally inducted in Rock and Roll Hall of Fame.

Stevie Ray Vaughan will always be known as one of the most influential blues guitarists of all time. He surely is one of the most dearly missed artists there ever was, and it’s only fitting that his life, his talent, his music, and his legacy be celebrated with a much-deserved induction into the Rock and Roll Hall of Fame, posthumously. It was such a big loss to the whole world of music when SRV lost his life in a tragic helicopter crash in 1990 at the age of 35. In 2015, Stevie Ray Vaughan was inducted into the Rock Hall by John Mayer. Mayer’s introduction speech focused on the intensity of SRV’s musical legacy, describing it as “a rage without anger; it’s devotional, it’s religious,”. The honor was received by none other than his best friend and big brother Jimmie Vaughan who said in his speech of Steve,

An all-star tribute to the late great guitarist was performed by SRV’s own band Double Trouble, who were also inducted that night, along with presenter John Mayer and Gary Clark Jr.

It’s been a long time coming, and the Rock and Roll Hall of Fame has been known to look over progressive rock acts such as Yes throughout the years, but finally they have come through. As part of the Rock Hall’s Class of 2017, 70s legendary progressive rock band Yes was finally inducted after being eligible for years. Yes was best known for infusing classical components into modern rock, putting virtuous progressive rock music on the map. Just as the Rock Hall website itself describes them, Yes is “the most enduring, ambitious and virtuosic progressive band in rock history” both on record and live in concert. It was only fitting that Rush’s own Geddy Lee and Alex Lifeson, who are big fans of prog rock, inducted the band into the Hall of Fame. Lee totally praised the band’s influence on their lives in his speech and emphasized that they have been snubbed for far too long, saying,

“It’s our great, great privilege and our great honor to right a total wrong and to finally welcome Yes into the Rock and Roll Hall of Fame.”

The Rock and Roll Hall of Fame has been known to shut out women artists in their prestigious list. Out of the 319 current inductees, only 43 are women. For the class of 2017, it was Joan Baez inducted into the Rock Hall and deservedly so! The folk rock singer and songwriter has been active for almost 60 years with songs that often speaks of protest and social justice. Her first three albums, recorded in the 60s and the 70s, all achieved gold record status. She was also one of the first artists to record and popularized Bob Dylan’s songs.

She has also impacted big iconic rock bands such as Led Zeppelin and Judas Priest. She was presented with the honor by Jackson Browne at the Barclays Center in Brooklyn, New York. In her acceptance speech, Joan said that her induction to the Rock Hall is unlikely and, in a self-deprecating manner, that she is aware that not many people from today’s generation would know who she is.  Joan adds,

“Though one cannot say I’m a rock ‘n’ roll artist, one cannot overlook the folk music of the ’60s, and the immense effect it had on popular music, including rock ‘n’ roll. Nor can anyone overlook the role that I played in that phenomenon. I was lucky enough to have found my voice when coffee shops were the order of the day.”

Canadian superstar-rock trio Rush has been pioneering and innovating progressive rock for decades now. And for so long Rush has been denied the recognition by the Rock and Roll Hall of Fame until only recently. In 2013, Rush was finally inducted into the Hall of Fame as they are truly “one of the most popular, innovative prog rock bands of all time” as described by the Rock Hall website itself. The band is most powerful playing off of each other’s musical genius and insane stage energy. They were inducted after the success of their 2012 album  Clockwork Angels , generating the most positive reviews the band has received. They only proved that they are still as influential even as they enter their sixties. Rush epitomized prog rock and they deserve every recognition they receive even Rock Hall’s long-delayed honor.

Bon Jovi’s having a nice day they when they received their second nomination into the the Rock and Roll Hall of Fame for the Class of 2018. They received their first nomination back in 2011, but didn’t get voted in but they get another chance this year. The legendary rock band has over six No. 1 albums on the Billboard charts, and four number one singles in the Billboard Hot 100. They should’ve been inducted the first time they were nominated, but hey, even the band remains optimistic! Even ex-lead guitarist Richie Sambora is willing to get back together with JBJ and the rest of the gang if they get inducted. Though he says he doesn’t really keep much in touch with the guys, only every once in a while since their split almost five years ago. Hopefully the band doesn’t have to live on a prayer for too long and finally get into that Hall of Fame! Maybe we’ll get a reunion tour too!